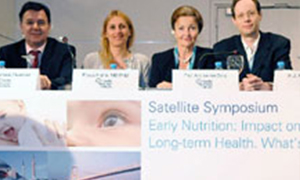 Recent research into the impact of early nutrition on short and long-term health was shared at the Nestlé Nutrition Institute Satellite Symposium held at the European Society for Paediatric Gastroenterology, Hepatology and Nutrition (ESPHGAN) in Istanbul, Turkey, in June 2010.

The three topics covered were: the ability of early nutrition to interact and influence genes and unlock new ways to combat mainstream diseases; the role of probiotics in reducing the crying time of infants with colic; and the allergy preventative effect of different milk hydrolysate infant formulas in children at most risk of atopic eczema.