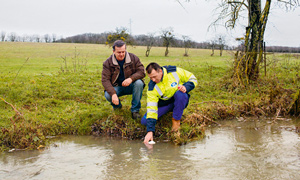 The world is facing a water crisis – linked to a growing global population, increasing prosperity, demographic shifts from rural areas to ‘megacities’ and the impacts of climate change. If we do not solve this water crisis, food security is at stake. With two-thirds of all fresh water used in agriculture and demand for water set to rise by 50% by 2030 – making water scarcity is a likely scenario for a third of the world’s population.

Water quality is also a significant issue around the world. According to the latest figures by UNICEF and the World Health Organization, 8% of the world’s population still rely on unimproved water sources for drinking water, and 3% drink surface water – for example, from rivers, ponds, or lakes. In rural areas of least developed countries, 97 out of every 100 people do not have piped water. Our Chairman Peter Brabeck-Letmathe has stated: “At the current rate of overuse, we will run out of water long before we run out of oil.” – acknowledging that our long-term success depends on the water resources that supply our business operations and support the livelihoods of suppliers and consumers.