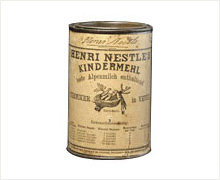 The vast Nestlé Group started humbly ~ with the vision of one Swiss chemist, Henri Nestlé. At a time when there was high infant mortality in Europe due to malnutrition, this dedicated man began experimenting with nutritious food supplements to overcome the problem. In 1867, he was approached to help an ailing premature infant who was unable to accept his mother's milk or any of the conventional substitutes. The infant began to take the milk food supplement he had developed, and a life was saved. The product, called Farine Lactée Nestlé, was soon marketed throughout much of Europe, and a new brand name began to take on life. 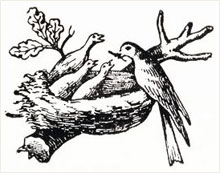 Henri Nestlé adopted his own coat of arms as a trademark in 1867. Translated from German, Nestlé means little nest and the now-famous symbol is universally understood to represent nurturing and caring, security, nourishment and family bonding. These attributes are still the guiding legacy for the company Henri Nestlé founded as it fulfils its commitment to 'Good Food, Good Life.'

In 1905, the Nestlé Company merged with the Anglo-Swiss Condensed Milk Company, the first condensed milk factory which opened in Switzerland in 1866. Nestlé entered into the milk chocolate business in 1904 when Peter & Kohler Swiss General Chocolate Company produced milk chocolate under the Nestlé trademark. The chocolate company later joined the Nestlé Group in 1929.

While the original business was based on milk and dietetic foods for children, the new Nestlé grew and diversified its range of products, through acquisitions and mergers with the better known brands of the time. For example: The manufacturing of LACTOGEN began in 1921, and in the same year, a beverage containing wheat flour was marketed under the brand name MILO. In 1938, NESCAFÉ, the world's first instant coffee was introduced. Then, in 1947, the MAGGI Company, manufacturer of soups and bouillon invented by Julius Maggi merged with Nestlé.

Nestlé continued to expand through the years with some major acquisitions.

Today, the Nestlé Company still adheres to its founder's beliefs and principles and is, therefore, very much people-oriented, and committed to understanding its consumers' needs throughout the world in order to provide the best products for their lives.

As the leading Food, Nutrition, Health and Wellness Company, Nestlé is the provider of the best food for whatever time of day and for whatever time of your life. Nestlé has grown to become the world's largest food company offering more than 8,500 brands and 10,000 products. With its headquarters in Vevey, Switzerland, Nestlé has more than 456 factories spread over 80 countries, and employs more than 283,000 people.