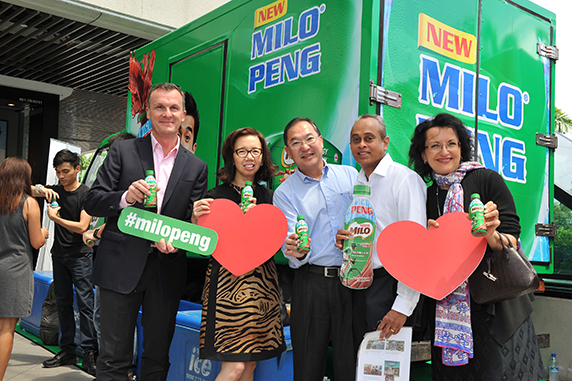 Like the best love stories, the Nathan Hartono and MILO romance took time to build-up and bloom. Now, six months on after that initial first “date”, the duo have finally made it official. MILO is launching a brand new bottled MILO Peng with the local crooner signed on as its ambassador this week.

Inspired by the nation’s love for the refreshing, chilled beverage, the inspiration behind the new bottled MILO Peng first took root last October when the local singer was competing in the hugely popular Sing! China competition.

Since then, spurred on by the overwhelming response from Singaporeans last October and the local singer’s affinity for the drink, MILO has worked to develop a bottled version of MILO Peng. This new recipe was developed specifically with a more “gao” and chocolatey taste to cater to Singaporean palates. Each convenient, ready-to-drink serving (225ml) also contains calcium equivalent to a glass of fresh milk.

Nathan’s recent SOS for MILO Peng in Beijing earlier in April was the catalyst for the brand to send across the new bottled MILO Peng to its muse for sampling. The resulting exchanges on social media platforms sparked off plenty of social media commentary as well as numerous spoofs from the public.

As there were increasingly more requests and comments on both MILO and Nathan’s social media platforms, MILO decided to accelerate the product launch and officially signed Nathan on as our ambassador this week.

Mr Chow Phee Chat, Director, Marketing Communications and Corporate Affairs of Nestlé Singapore said: “This Singaporean love story was first triggered by the public’s support for Nathan Hartono and MILO Peng. It seeded the idea of developing a new take on MILO Peng which truly caters to what Singaporeans want. The new bottled MILO Peng offers local consumers a more chocolatey and “gao” flavour, without being too sweet. It’s refreshing energy that’s made for Singapore that can be enjoyed anytime, anywhere.

“Nathan’s strong work ethic and courage to constantly challenge himself, go further and do better is hugely inspiring and resonates strongly with MILO’s core values of hard work and perseverance. We are delighted that Nathan has agreed to come on board to bring our campaign to life given his affinity with MILO Peng and our history together!”.

The new bottled MILO Peng (225ml) will be available in all major retail outlets at $1.20 per bottle. The campaign featuring Nathan Hartono will be launching end-May.

MILO® is a nutritious, chocolate malt beverage made from the natural goodness of malt, milk and cocoa. First sold in the 1936 and locally produced since 1984, MILO® contains ACTIVGO, a combination of PROTOMALT®, vitamins and minerals, giving you the energy to go further. In 2006, MILO® attained the Healthier Choice status from Health Promotion Board. As Singapore’s favourite nutritional energy beverage, more than 1 million cups of MILO® are given free to Singaporeans annually through various sports and community event through the MILO van.

MILO® has been championing youth sport development in Singapore since the 1950s, believing that sports teaches positive values such as perseverance, teamwork, courage which sets the foundation for a child’s development. Through sponsorship of various sports events with institutions such SportSG and Singapore Sports School, MILO® aims to nurture Singaporean athletes into national sports heroes. MILO® also continues to rally and drive national support for Singapore at international and regional events such as the recent 2015 South East Asian Games in Singapore.

In addition to sports, MILO® Singapore champions everyday victories and empowers youth with a host of educational activities. These include school assembly talks on health and nutrition organized in conjunction with Health Promotion Board and the MILO® Discovery Tour for students at the Jurong Factory.

Since 2005, Nathan Hartono (向洋) has been a prominent presence in Singapore’s arts scene, having done work in music, on stage, as well as onscreen. Starting with an amateur singing competition, he has gone on to perform on hundreds of stages around the world — from stadium shows (NDP 2008/2015, Youth Olympics, Asian Youth Games, Stefanie Sun Tour), to selling out theatres (Esplanade Presents: Nathan Hartono 2008/2014, Pangdemonium! Productions: Spring Awakening, Next to Normal), to staging his biggest solo concert at the Esplanade Concert Hall in July 2016. He first appeared onscreen starring on HBO’s Halfworlds (2015), and recently emerged as first runner-up on popular China-based singing competition, Sing! China 《中国新歌声》.

This July, Hartono will be returning the musical stage once again as one of the lead cast on The Great Wall: One Woman’s Journey. He is also set to make his silver screen debut as the male lead on an upcoming Singapore-Taiwan co-production, Warrior of Love 《 战神》 , Singapore’s first car-racing film. New music is also in the works, and is targeted for release later this year.