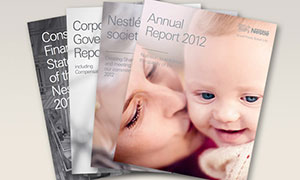 Nestlé has published its Annual Report 2012, outlining the company’s performance last year and its future ambitions.

Key figures from the report include:

“The environment in 2013 looks to be every bit as challenging as it was in 2012,” said Nestlé Chairman Peter Brabeck-Letmathe, and Nestlé Chief Executive Officer Paul Bulcke in a joint letter to shareholders.

“But 2013 will again provide opportunities to leverage our competitive advantages, to deliver on our growth opportunities and benefit from our continuous drive for improvement across the group.

“We expect to deliver the Nestlé Model once again of organic growth between 5-6%, as well as an improved margin and underlying earnings per share in constant currencies.”