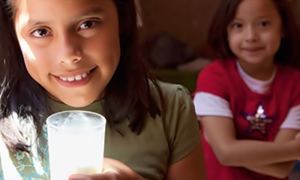 FORTIFIED MILK: Multi-micronutrient fortification was associated with a significant increase in haemoglobin in young children's blood.

Researchers from the Winterthur Institute of Health Economics in Switzerland analysed the combined results of 18 published trials involving a total of more than 5,400 children.

They found consumption of milk and cereal products fortified with iron and other micronutrients - such as zinc and vitamin A - were associated with a significant increase in the level of haemoglobin in young children's blood.

Anaemia - the state of having too few red blood cells and therefore too little haemoglobin - is commonly caused by a lack of iron in the diet.

However, multi-micronutrient-fortified milk and cereals produced even more significant increases in haemoglobin than their single iron-fortified counterparts.

The study, published in the Bio Med Central Public Health journal, is believed to be the first analysis of the combined results of published studies examining the effect of micronutrient-fortified milk and cereals on the blood haemoglobin of children from the age of six months up to three years.

The researchers identified about 1,000 potentially relevant trials from the last 45 years to pinpoint those suitable to include in the study.

The 18 trials they finally identified to analyse in the study were conducted in Africa, Asia, South and Central America and Europe.

The average age of the children who took part in each trial ranged from six months to two years. The number of children involved varied from 33 to more than 1,000.

The majority came from low income groups in rural communities, or communities on the outskirts of urban areas.

The researchers followed current guidelines for the performing and reporting of systematic reviews and meta-analyses - studies that combine the results of several different scientific investigations examining a set of related theories.

They used Medline, the United States' National Library of Medicine's main bibliographic database, and the Cochrane Collection, an internationally recognised online collection of healthcare research, as their primary sources of material.

They assessed the risk of bias in individual trials by analysing the quality of the methodology and the completeness of the reported results.

Young children and pregnant women are particularly vulnerable to iron deficiency because they need higher levels of the mineral for growth.

The consequences of long-term lack of iron in the diet can include impaired mental development in children, decreased physical work capacity and impaired immune function.

The researchers' findings help to explain in biological terms why multiple, rather than single, micronutrient deficiencies are responsible for a variety of health problems.

The study was commissioned by Nestlé and the Nestlé Nutrition Institute.

Nestlé has more than 140 years' experience in improving the micronutrient profile of food products through fortification.

Today, Nestlé offers a range of products around the world fortified with micronutrients including iron and vitamin A.

The company's dairy business makes fortified, affordable milks available in more than 80 countries around the world, where they are largely consumed by pre-school children.

The Nestlé Nutrition Institute (NNI) is a non-profit organisation based in Switzerland.

It is committed to fostering 'science for better nutrition', by sharing scientific information and educational materials with health professionals, scientists and nutrition communities in an interactive way.

The NNI's activities have included events to discuss the latest scientific research into the global burden of micronutrient deficiencies.