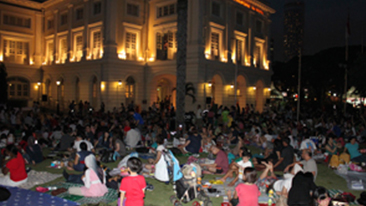 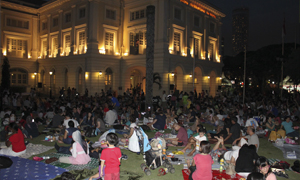 Crowd of 3000 at the Asian Civilization's Museum
The Passion ACM Movie Night presented by NESCAFÉ was held on 30th April this year at the Asian Civilization's museum. Families with children, youths and couples made up the crowd of 3000, bringing their picnic mats and baskets early to get good seats and explore the exciting peripheral activities. They were treated to free popcorn, ice cream and body art, with NESCAFÉ serving IPOH White Coffee to refresh the public. By the end of the night, 1200 cups were served! NESCAFÉ also gave away complimentary redemptions of an elegant picnic basket, filled with goodies from MILO, KIT KAT and UNCLE TOBY'S.

As the sun began to set, the emcee began the evening with NESCAFÉ contests. One such competition was to judge who could repeat "I love NESCAFÉ!" the most times in a minute, while another required stamina from the contestants to hold the phrase "NESCAFÉ Ipoh White Coffee" in one continuous breath for as long as they could. NESCAFÉ's celebrity endorser Dai Yang Tian then filled the movie screen with our NESCAFÉ Ipoh White Coffee commercial, which required the audience having to pay attention and answer simple questions to win prizes. The delighted winners walked away with NESCAFÉ hampers and limited edition premiums.

The chatter from the crowd instantly hushed as the movie began. A magical night under the stars, both children and adult laughed at the silly antics from the cartoon scenes and sighed at touching moments. A cursory glimpse of the audience revealed smiles all round as friends and families quietly celebrated the evening of friendship, love and enjoyment. As the night came to a close, much of the crowd made their way once again to the NESCAFÉ tent for another irresistible cup of white coffee before they made their way home.

Article Type
News
To The Top